Don't Believe Everything You Think 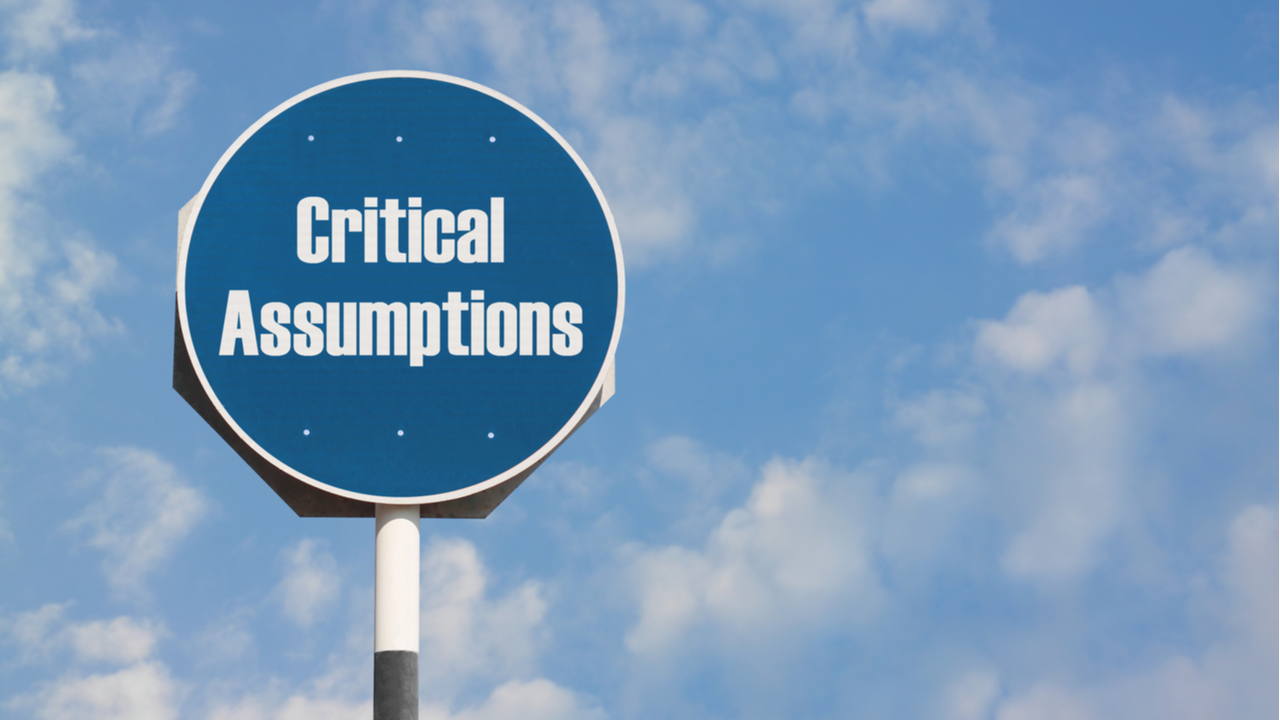 Over the years, I’ve reviewed countless proposals, reports, project plans and other documents in the course of my board work and as an advisor to boards. Somewhere in the document, often buried, there should be a section labeled ‘Assumptions.’ It lists the conscious decisions taken by management to treat the unknown as known. Typically, the list of assumptions will include finances, people, resources, schedules, logistics, etc.

Articulating these assumptions is necessary in order to make a decision. The board can question any of the assumptions, challenge them, seek verification, ask for stress testing using different assumptions, add additional assumptions, or accept them as given.

After the fact, the board can ask management to report on which assumptions held true (although, to be honest, I have seldom seen this happen.)

That’s all fine and dandy. The assumptions are out on the table for all to see, acknowledge and debate if they see fit.

Far more worrisome – and the subject of today’s blog - are the subconscious assumptions that we all make, and how they affect the board’s decision-making. The title, ‘Don’t believe everything you think,’ is based on a quote from Byron Katie, an American speaker and author.

Assumptions are things we believe to be true without requiring any supporting evidence. Subconscious assumptions fit into the realm of “unknown unknowns.” These are the assumptions we make without even being aware of having done so. They develop as part and parcel of the learning process we undergo as our brain seeks to make sense of the world around us.

Making an assumption is neither good nor bad; assumptions lie within every decision. It’s as natural as breathing. Besides, not all assumptions are dangerous. These mental patterns and emotional tags enable us to rapidly, even intuitively, assimilate information, ascribe meaning to it and make decisions. That can be a good thing in the right circumstances. It’s a quick and efficient way to make a decision.

But it’s important to be aware that, in its search for patterns and congruence, the brain will generalize, distort, or even delete incoming signals. And in situations that call for critical thinking and deliberate decision-making, those distorted signals can wreak havoc with our ability for rational judgment, causing us to jump to incorrect conclusions and give way to Groupthink.

There are a few assumptions that are so common they are considered to be universal. Let’s take a look at two of these that are known to influence board decision-making.

The assumption of consensus can be described as the belief that ‘the world thinks like me.’ Each of us, as individuals, assumes that our own beliefs, values and experiences are shared by others. At the board level, this can result in the unspoken belief that the organization’s stakeholders – customers, employees, suppliers, investors, etc. – have the same tastes, demands and expectations as board members do. Making such an assumption has had negative consequences for organizations launching new products or services, penetrating new markets, expanding geographically, or even just starting a new advertising campaign.

This phenomenon is just one more reason why board diversity pays off. It means that, even though all board members are still prey to the assumption of consensus, at least there are different sets of experiences represented within these assumptions. Careful questioning can bring these to the surface.

A second universal assumption is the assumption of competence, a well-known psychological syndrome that boosts our image of ourselves as competent and in control. In essence, we perceive ourselves – and want to be perceived by others – as competent and infallible, not prone to error. We unconsciously tend to assume we know more than we do, or that we have more power than we do.

This assumption about our own competence drives much of how we behave. It can result in self-justifying feedback loops, where we become anchored in our position, blind to data that does not reinforce our conclusions.

If every board member is prey to this assumption of competence – and if they are human, then they are – it’s remarkable that sound decisions are ever made in the boardroom! And yet rational discussions, good judgment calls, and sound decision-making take place every day.

How? Well, it turns out there are ways of identifying and challenging your own assumptions and those of others. It begins with awareness.

Challenging your own assumptions

That moment when you become aware that you are taking something for granted or treating a belief as fact or truth, that’s your opportunity to challenge your own assumptions. Give yourself permission to explore without judgment. Then challenge your assumptions using these four strategies from The Value of Challenging Your Assumptions.

“Begin challenging your own assumptions. Your assumptions are your windows on the world. Scrub them off every once in while, or the light won't come in.” – Alan Alda

Boardroom assumptions and The Savvy Director

There are buried landmines of assumptions in every decision, and the more consciously that people look at the way they make decisions, the greater their chance of finding the landmines before it’s too late.

“Most of our assumptions have outlived their uselessness.” – Marshall McLuhan

So, your role as a savvy director is to raise individual and organizational consciousness by identifying subconscious assumptions that the group is making, and surfacing them so they can be explored and tested. Your goal is to help the board make faster, smarter decisions based on facts instead of assumptions.

People’s assumptions affect how they interpret data. In fact, they can become blind to data which does not reinforce their assumptions.

There are verbal clues that can alert you to the fact that this is happening. Listen for comments like, “It can’t be done,” “We tried it last year and it didn’t work,” and “The client will never buy it.” When this happens, it becomes critical to assess what people really know, and what they think they know. In other words, to keep checking people’s assumptions, bringing them out into the open.

A useful way to think about this situation is to visualize a ‘circle of assumptions’ consisting of five concentric circles, starting with data in the center and ending with actions in the outermost circle. 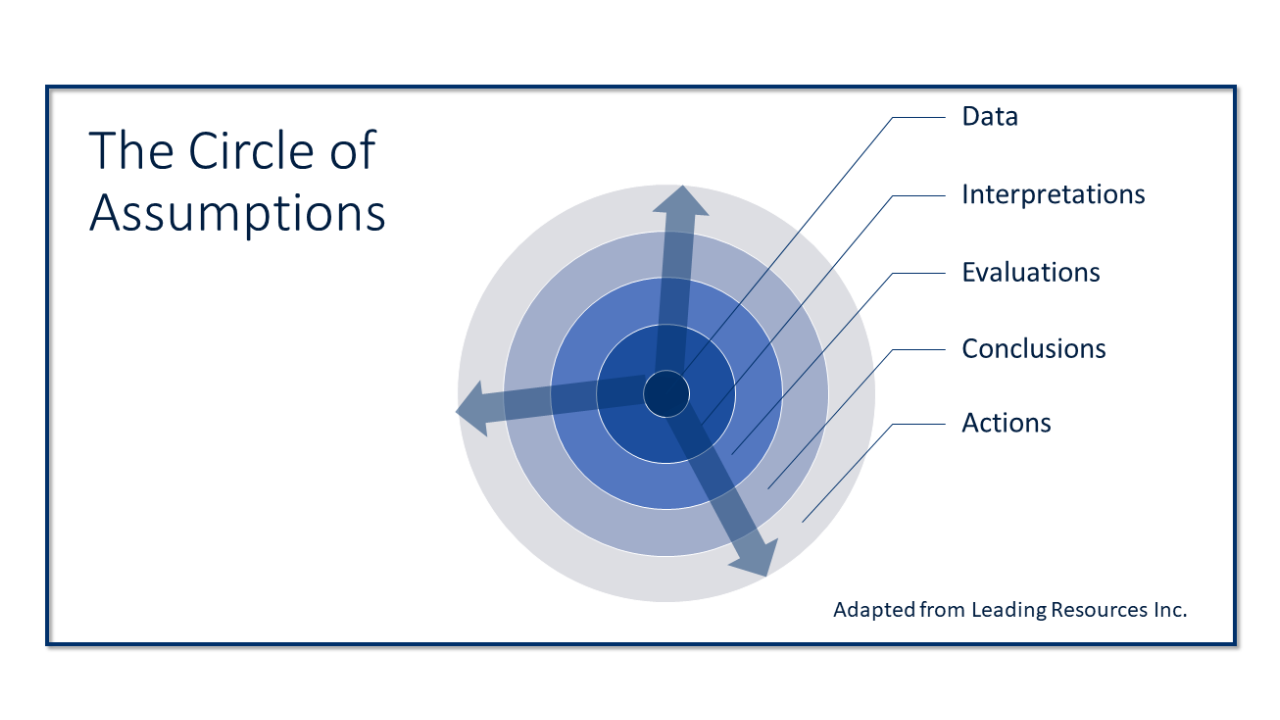 This image helps to remind us to drive back toward the center, toward the data. When people focus on the data they’re missing, it allows them to move forward to resolve the problem rather than remaining mired in their assumptions.

The best way to help your board move back toward the data is by asking questions. To avoid sounding condescending and superior, include yourself as someone who is making assumptions by using ‘we,’ ‘us’ and ‘our’ in your questions. Ask questions such as:

Share Your Insight: How do you identify and challenge your own assumptions and those of your board?