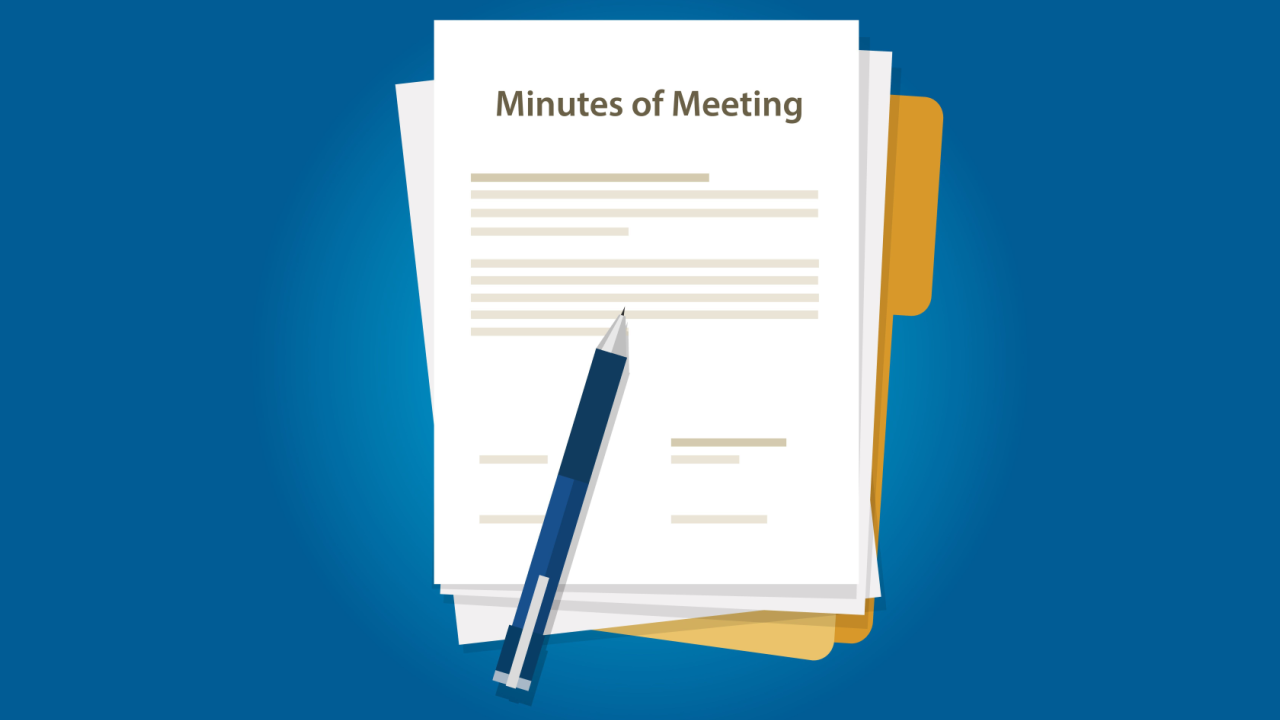 One of the first things to happen at every board meeting is the approval of the minutes of the previous meeting. Until that happens, the minutes are still considered a draft.

It’s an important step, even though it might just take a few seconds. That’s because minutes are the official record of what happened at the previous board meeting – who was there, what decisions were made, and what actions were planned.

What exactly should you be looking for in the minutes before you vote to approve them?

This topic seems straightforward, but at DirectorPrep we still get questions about it. So, let’s dig in a bit.

Knowing what purposes are served by the minutes should help guide you in your review.

The official record. The simplest answer to the question, “Why keep minutes?” is that every corporation is required to keep a record of their directors’ meetings. They are the official record of who attended, votes taken, decisions made, actions planned, and anything else consequential.

Evidence of due diligence. Well-written minutes serve as evidence that the board exercised due diligence in making its decisions, which provides legal protection for the board and the organization.

An aid for preparation. When you start your meeting PREP by reading the minutes of the last meeting, it will refresh your memory and help you find the right head space. Minutes allow boards to pick up seamlessly from where they left off at the last meeting.. And as new directors join the board, reading the minutes of the last few meetings can help them “hit the ground running.”

Impartial information for absentees. Since good minutes are factual, objective, and neutral in tone, they allow absentees to know what transpired from an impartial point of view, rather than relying on hearsay or faulty memories.

A tool for accountability. The minutes document the goals, projects, and initiatives that the board has committed to, as well as the deadlines and who is responsible, so they’re useful for holding people accountable and tracking progress toward goals.

A useful reminder. As time passes, minutes are a useful reminder of not only the decisions that were made, but also the reasoning behind them. If questions arise later about why a decision was made, the minutes should be able to answer those questions.

Meeting minutes vary widely from one organization to the next. There’s no right or wrong way to draft them, but keeping the various purposes in mind makes it easier to determine what should be included and what should be left out.

There’s no legislation that mandates the format, content, or level of detail. Instead, boards tend to look to “best practices” or Robert’s Rules of Order for guidance. In the end, the corporate secretary and board chair should agree on what will be included and what won’t.

Good minutes are a short, succinct summary, not a lengthy manuscript or a novel with copious dialogue. When it comes to documenting board discussions, it’s important to paraphrase the major arguments for or against a motion, without naming names or specifying who said what.

Finding the right level of detail is a bit of a balancing act. The goal is to create minutes that are specific enough to provide evidence of due diligence – demonstrating that the board was properly focused on the business at hand – without getting into excessive detail.

You don’t want the minutes to be so sparse that the reader can’t decipher what actually occurred, or so minimal that, during an audit or legal proceeding, they arouse suspicion that due diligence wasn’t applied.

What Not to Include

Here are some elements that shouldn’t be included in the minutes.

Individual opinions and votes. In general, leave names out. Don’t quote anyone directly or indicate who was on which side of a discussion. The votes of individuals shouldn't be listed, but the name of anyone who abstained due to conflict of interest should be included. And, if a director asks that their dissenting vote be recorded, their request should be accommodated.

Detailed explanations of reports. Mention any reports, presentations, or other material that were presented, but don’t go into extensive detail about the content. Instead, the minutes should note where the document can be found and, if possible, include a hyperlink.

Emotion. Minutes should be objective and neutral. There may be conflict in the boardroom, but leave emotion out of the minutes. Just stick to the facts.

Q, Should the minutes reflect the names of the directors who move and second a motion?

A. For many boards, it’s been a long-standing practice to include the names of movers and seconders, however, there’s really no requirement to do so. Robert’s Rules call for the name of the mover, but not the seconder. And many “best practice” sources suggest not recording either name, in keeping with advice to leave individual names out of the minutes altogether.

If a director abstains or recuses themselves because of a conflict of interest, that should be recorded. In the case of a board member who disagrees with a board action and is concerned about personal liability, they are entitled to have their dissent noted in the minutes if they so desire.

Q. Should directors make and keep their own notes?

A. It’s not uncommon for directors to keep personal notes during a meeting, so they can ask questions later. They might also check their notes when they review the draft minutes for accuracy. But once the minutes are approved, their personal notes should be destroyed.

Personal notes are open to varying interpretations by outside readers, and any discrepancies with the formal minutes might end up being embarrassing or damaging to the organization.

Q. Should there be minutes of an In Camera session?

A. While there’s agreement that some sort of record of In Camera sessions should be kept, there’s no real consensus about how to do so and what to do with the records.

Formal motions and votes are rare during In Camera sessions, but they do happen. For instance, discussions and votes about the CEO’s evaluation and compensation usually occur In Camera. Board approval should be reflected in the regular meeting minutes and, if the board wishes, the discussion can be reflected there as well. The board chair should ensure this happens by passing the details to the corporate secretary.

Some boards choose to keep formal minutes of their In Camera sessions that include details like date, start and end time, attendees, resolutions, votes, etc. These In Camera minutes are filed separately from other records and access is controlled.

Directors shouldn’t assume that, in a lawsuit, records of In Camera sessions would be shielded. Refer to the article In Camera Board Meetings May Not Always be Private in the Resources section, about a Supreme Court of Canada decision that In Camera minutes and other documents, including director’s notes, could be part of the disclosure process during litigation. 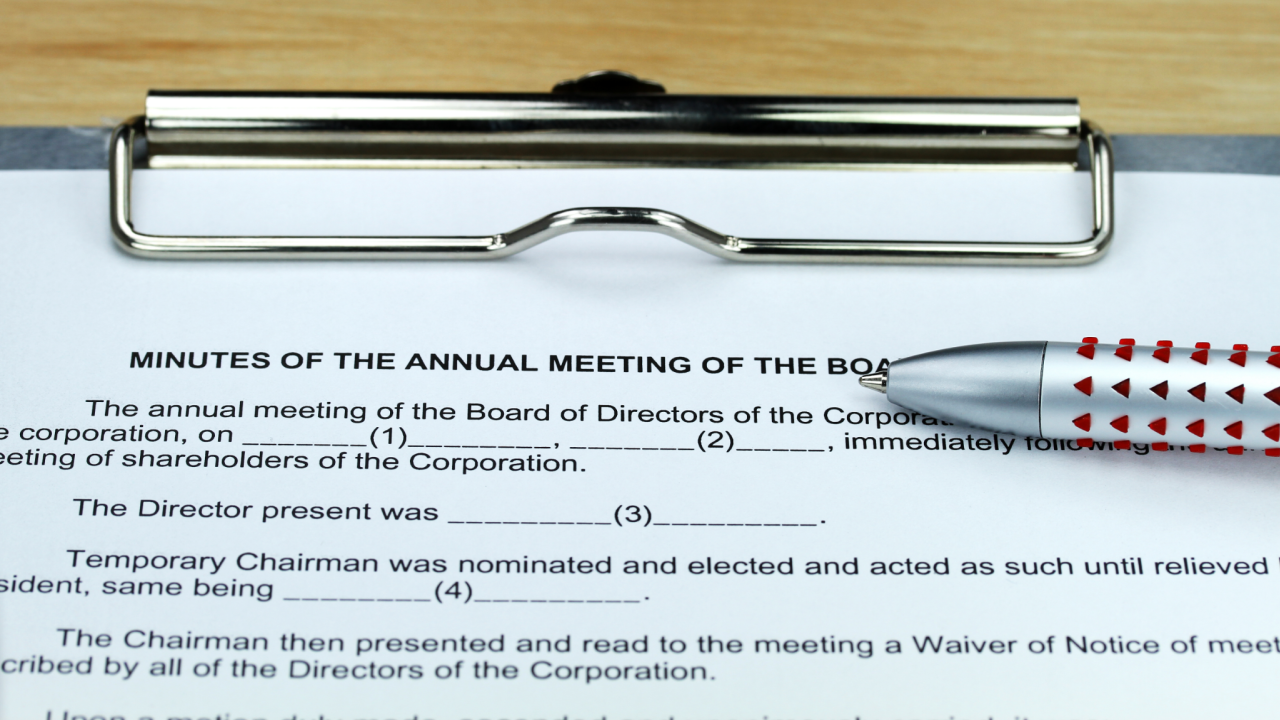 First, let’s get the Caveat out of the way. Here at DirectorPrep, we’re not lawyers and the last thing we want to do is dispense legal advice. If you and your board have legal concerns, always seek advice from your own legal counsel who is knowledgeable about the law in your own jurisdiction.

Board meeting minutes, once approved, are the legal record of what happened during a board meeting. Although you may think it’s extremely unlikely that your board could be involved in a lawsuit, these things do happen. Not only that, depending on your organization, there could be situations other than lawsuits where your minutes have to be produced to a third party. So, keep those possibilities in mind when reviewing the minutes.

Minutes are not protected from discovery in the litigation process. They may be subpoenaed and used as evidence in a court of law to show that the meeting was actually held, important matters were discussed, and directors did (or did not) apply due diligence in their deliberations.

Well-written meeting minutes can protect the organization and directors against liability. Conversely, if minutes are incorrect or incomplete, or if there aren’t any minutes at all, the organization could be in legal trouble.

That’s one reason to avoid direct quotes or attributing statements to specific directors. These could be misinterpreted by courts or taken out of context in ways that could harm the organization’s reputation or create legal liability.

For our Canadian readers, I suggest referring to the document “Canada: Best Practices in Drafting Board Minutes: In Brief” listed in the Resources section if you’re interested in more detail about best practices from a legal point of view.

After the Board Meeting

It’s best if the corporate secretary, or whoever’s in charge of the minutes, writes and edits the minutes while the meeting is fresh in their mind. That allows the draft minutes to be circulated to board members in a timely manner.

Reviewing the draft minutes for accuracy is not a step that should be taken lightly. Review them and suggest any corrections immediately, so changes can be reflected in the minutes that will be approved at the next meeting.

Supplementary Information: What Goes in the Minutes?

It’s helpful to use a consistent format from one meeting to the next – a template ensures that certain basic information is included each time. There are a few template examples in the Resources section. They’re a good starting point, but your board secretary will probably want to customize one for your own organization.

All board meeting minutes should contain certain basic information.

The body of the minutes provides an overview of what happened in the meeting without being overly wordy. This section includes short, succinct statements as to the topics of discussion, the motions, the votes, and the action items or next steps.

The body of the minutes should include: